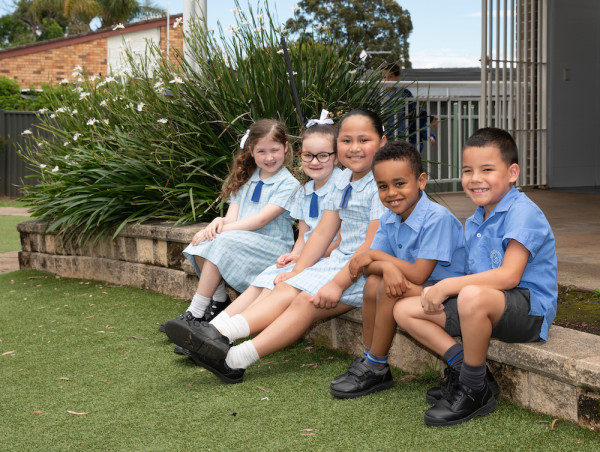 Our school was established in 1982, after a committee of dedicated parents worked tirelessly to have a Catholic school in the Ingleburn area. It was founded by the Good Samaritan Sisters under the guidance of Sr Bernadette Nichols, the first principal. The school began with 120 students from Kindergarten to Year 2.

Accommodated initially in temporary buildings, it took 6 months before the school could move into the new buildings. By 1988, all classrooms and administration buildings were complete.

The library was completed in the early 1990s and our school-parish hall was refurbished in 2017 after the completion of our new church in 2016.

Our student population is currently approximately 340. Many of our students at Holy Family come from diverse, linguistic and cultural backgrounds:

Some languages spoken include Tagalog, Filipino, Chinese, Arabic, Spanish, Samoan and Indian languages such as Malayalam and Hindi.

Read more about What We Offer at Holy Family and Take a Virtual Tour of our school.

A Catholic School in the Diocese of Wollongong

Catholic schools have a long and proud history in the Australian educational landscape. Originally established by orders of brothers, nuns and priests in the nineteenth century, they are now almost entirely staffed and led by lay people.

Catholic systemic schools in the Diocese of Wollongong are either parish primary schools like Holy Family, or diocesan secondary or K-12 schools. They are all co-educational schools. (The diocese also has another seven independent congregational secondary schools, some of which offer single-sex education.)

Catholic schools have a unique character because as well as being places where learning is highly valued, they are places where priority is given to a values-based education in the Catholic faith. This involves all staff and students proclaiming the Good News of Jesus Christ to the world. Staff identify strongly with their school and take pride in their work and the school’s achievements.

Take a Virtual Tour of Our School